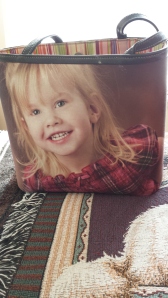 Those of you that know my Mom, know that it was a rare moment that she didn’t have her purse with her. When I would drive to my home town and we would go out for the day, her first comment to me was, “Where is my purse?”. Normally it was found right by her bed or by her chair. The purse has witnessed a lot and could most likely tell some stories.

The history of her favorite purse shall remain partly a secret, mainly the price. When I worked in an office building, Steve will tell you the worst thing that could have happened to me is that a photographer moved downstairs. I loved his work and he used Sophia in some of his ads and marketing. I will admit that I went a little crazy with photos. One night, he brought up a purse he had made with Sophia’s picture on it. I instantly thought, Mom is going to love this! He had me hook, line and sinker. I didn’t really ask the cost at the time, which I should of. The cost of it will always be a secret, nor does it matter. I knew it was the best gift for Mom.

I don’t remember exactly when I gave it to her, it might have been for her birthday. I know that she had the biggest smile on her face and instantly ditched her blue, fake leather, old purse. Her granddaughter was now on display in the form of a purse. It’s funny, when I think of it, I never once wanted the purse for me, just for Mom. To say I had bought her the best gift is an understatement.

That purse has been through a lot.

I remember when my parents went to Yuma for the winter, Dad would call and tell me the stories of Mom forgetting her purse at the café, the casino and at their friend’s house. I heard it almost every time I called and I could tell my Dad did not understand the start of her memory loss. I covered for her since I have also forgotten my purse a time or two. In full disclosure, a few months ago, I forgot my purse at home, three days in a row. THREE DAYS!  My tendency to cover for her was great. My Dad knew it and I covered for her as only a daughter will do.

I covered so well for her, I about lost my mind two years ago. On a phone call to her, she casually stated that she couldn’t find her purse. I asked if she looked in all of her normal spots and she had. I called her assisted living building at the time and they could not find it in her room. Please remember, Mom lived in a small town and I wasn’t quite so worried; it will show up somewhere.

I am starting to panic now since I realize she has her checkbook and all of her cards (SS, medical, license) all of the stuff I should have taken out and put in a safe spot. I am also realizing that I have failed her, just a little. I really wrestled with the fact of letting her keep her checkbook and for her to write checks. I knew she only wrote out a few checks to the Waters Edge, church and to get her hair done. I would come every month and pay the rest of her bills. There was a part of me that did not want to take away her checkbook because then I would know she couldn’t handle something as simple as writing out checks. It’s similar to taking away your drivers license. It simply came down to independence for her, and her writing those few checks. I don’t know why I kept those important cards in her purse still. She took her purse everywhere with her, and I would just pull them out at the doctors office or if we needed to fill out forms. Handy, right in her purse and now the purse is missing.

I spent one day calling every friend and spot I thought she had been at. I called The Edge, Tom’s Food Pride, Fron Church, Bremer Bank and Samuelson’s Drug Store. No Purse. I even spoke to Lois, the church secretary twice. I can’t believe her purse is gone and I am mad at myself.

I believe it was day five, Lois called from Church and gave me the good news that they had checked again in the pews and it was tucked under the pew and they found it. Everything was intact and nothing was missing. Hence, it was found at church and in my beautiful small town where everyone knows whose purse that was. I am so grateful to Lois, who looked just one more time and found it.

The purse has been on vacations with her, witnessed a second grandchild be born, held close to her arm when she buried her husband, been forgotten a time or two and has been on this journey with her. It’s moved from her home, to the assisted living and now to her memory care unit. I noted it today, hanging from her bed post and still in sight for her. It is hardly used but carries some mints, some spare change, a pen, dental floss and a few pictures of my girls. Her checkbook and cards are gone and hidden in my desk.

That purse, for what is it worth, was the best investment. It filled my Mom up with joy, pride, love and excitement. It was worth every cent…

November was a really long month for Mom and I. Not that anything really happened or we ran into a problem. I should maybe state that it was really long for me.

This month alone I worked on:

*Getting her a handicap sticker. I’m not sure why I didn’t think of it before for our car rides. You can thank our wonderful doctor.

*I have been (procrastinating) working on her Medicaid paperwork and to say it has been mind-boggling, is an understatement.

*Every six months I have to prove to Social Security that her SS money is going to her care. I have to fill our another form with documented proof.

*I spent two hours with a Humana rep to pick another plan for her because her original plan went away. I will never get those two hours back again.

*I spent two hours navigating the Humana site and signing her up for free supplies. Two hours.

*Bills, Christmas cards, ordering pads, keeping up with her meds and concerns that I have overall.

I’m only sharing this information with you to show what it is like to take care of some you love with Alzheimer’s.  There are days that I worry that I have no idea what I am doing. As hard as I try, I worry about making a mistake for her. What if I don’t pick the right plan? Did I not understand that she would get free stuff every month? Why do I want to fall asleep watching this 45 minute video that Humana mandates that I watch? Please understand that I am not complaining. I would do this for her a million times over. At times, it just plain hard. Very hard.

November 7th was my birthday and it was always a special day for my parents. When I was younger and we lived on the farm, we had grand parties and invited all of our neighbors. She never missed calling me on my birthday or coming to see me. I think she loved the day more than I did.

On that day, I went to pick up some cupcakes for the staff and to have coffee with Mom. She was in the entry way and she saw me through the door and waved. She saw my cupcakes and asked why I brought them. I did something that I rarely do with a person with memory loss. I asked her a question. “Mom, what is special about November 7th?” We were walking down the hallway and I can tell she is confused. “Is it an important day for me?” I tell her its someone’s birthday. Long pause. “I wish I could tell you”.

I know in my logical brain that I should not be sad. She has memory loss. I think she forgot last year. I know. I know. But for some reason, this year I was sad. November 7th did not ring a bell for her. I feel guilty because I am sad and guilty because I had hope she would remember.

We get to her room and have coffee and the cupcake. I am lying on her bed and I catch her staring at me. I sometimes wonder if she really knows who I am. I can imagine in her brain, that I am “That girl”. That girl that brings her snicker bars and banana’s, makes her sign things she doesn’t know what she is signing, tells her that this is her home now and that I am her daughter. I am “that girl” that walks with her, brings her grandchildren to see her and we watch the birds together. I am not 100% sure she really knows its me, Jodi and not “that girl”.

I came to see her a few days ago and I was talking to Mickey, the activity aide. She and I used to work together twenty years ago. My Mom, out of the blue, introduced me to Mickey and called me Jodi. Wow. For that moment, I wasn’t “that girl”, I was her daughter Jodi. I remember walking out of the building smiling.

The month has had ups and downs. There are some days that I can’t make it over there because I’m tired. Really tired. I know she is being taken care of well, but there is nothing like being there and checking on her. I call her at night and I can tell again when I am “that girl”. Her voice distant and she wants to get off the phone.

I miss the days when I was Jodi to her. Here is to a better December….

Words are My Wife.

"The name of my village is Kaskikot. I think this place has all the pieces of Heaven."

Player of words, artist of emotions.

Muddling Through My Middle Age

I am the Chief Meteorologist at FOX 9 in Minneapolis; I love my life, love my wife, love my daughters and love my dog...kinda like the cat. I lost a third of my lower lip to squamous cell cancer in 2016...it is now early 2017 and this blog will hopefully serve as my therapuetic writing journey through topical chemotherapy treatment

Living, Loving, and Laughing Through Alzheimer's and Related Dementias

Caregiving in the Forest

Thoughts on the Journey Through the Forest of Dementia

Learn to Love. Have a Good Laugh. Remember to Live.

be church. be community.

A union dedicated to advocating for nurses, patients, and quality care in Minnesota, Wisconsin, North Dakota, and Iowa

Non-fiction writing with a social purpose

keeping up with the johnsons

My Mother, Her Dementia and Where I Fit

With early onset dementia, our roles are now reversed. She frequently calls me "mom".

Learning Disabilities, Mental Health, and God's Grace Through It All